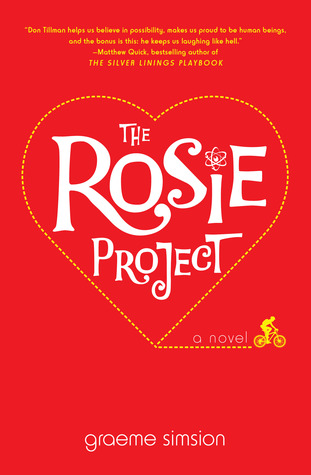 Don Tillman is looking for a wife, enter Rosie, she’s everything Don was trying to avoid. With the mishaps of a romantic comedy, The Rosie Project by Graeme Simsion will warm your heart and leave you wanting more.

This was one of those books that I’m pleased I happened upon. It was unconventional and written with such a strong, unique, voice, it was no wonder I couldn’t put it down. Of all the books I’ve read this year, The Rosie Project has the strongest sense of voice bar-none. As a writer myself, there are certain things I look for in a book, and this was one of them. From the first pages Don sucks you in as he tells you his story. It’s easy to root for his successes, and morn his losses, even if he struggles to do the same for himself.

A little digging proved there’s a second book already published and potentially a third one on the way. In true Miranda fashion, I’ve already purchased the second and eagerly await the third. There is little doubt in my mind that the Rosie Effect, and whatever Graeme has named the third, will not be just as powerful as the first book.

Rosie is charming, Don is endearing. The antics between Gene and Claudia (Don’s only friends) are just as engrossing, and I’m dying to know if they’ve worked out their issues just as much as I want to know how married life is for Rosie and Don.

I was surprised to read, at the back of the book, that it was originally a screenplay. After five years of edits and rewrites and more edits and rewrites, The Rosie Project was born. I find tidbits like this encouraging. It’s nice to see that amazing authors didn’t just pull a fully formed book out their ass. It took hard work and long hours and commitment to create a piece of art, ready for the world.

This is a light summer read, that will not disappoint.