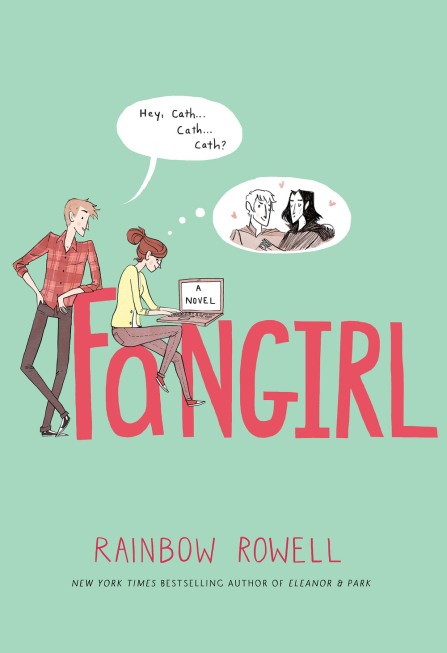 FANGIRL is my third Rainbow Rowell book and so maybe my love of ELEANOR AND PARK and KINDRED SPIRITS should have been the clue that reading more of Rainbow’s stuff was a good idea. But if I’m being honest, I had this fear that I’d be let down. It happens sometimes. You build an author up in your head and then fall that much harder when they fail to meet such high expectations. Maybe ELANOR AND PARK was a fluke and when I read FANGIRL or any other book by Rainbow, I’d be disappointed. I couldn’t face being such a low after I’d fallen so hard for the other two books.

There are so many reasons to love FANGIRL. So many reasons to run screaming through the streets, praising this book. Beyond whatever I can say, what I love about this book is the way it stirs my heart and warms my soul. It’s like drinking a cup of something I didn’t know I was missing.

Cather is a Simon Snow fan. She’s also one of the most popular writers of Fanfiction online. Being a fan has been Cath’s whole life. It’s the one thing she’s really good at. She and her twin sister Wren have drifted apart. College has brought on some new challenges. Cath is on her own for the first time and far out of her comfort zone. Her English professor believes that fanfiction is the equivalent of plagiarism. Her roommate is moody with a charming boyfriend who is always around. Oh and the boy at the library who only wants to use her words. Does moving on mean she has to give up Simon too?

This was beautifully written. I’m liquid and in love. Watch me pretend like I wasn’t a big fan before… because yea, it’s official, I love Rainbow Rowell. Hard. I love her books so hard I want to force them down my friend’s throats until they have to like her too. That’s not weird is it?