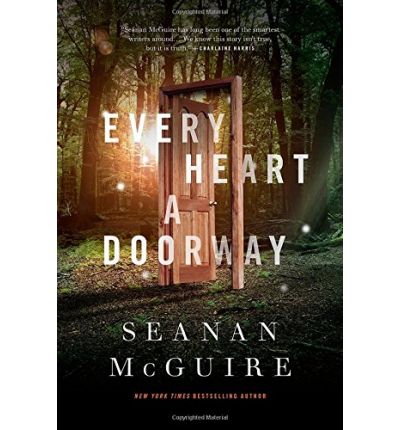 What I would give to spend an hour inside of Seanan McGuire’s head. Every time I turn around I seem to be surprised by her. I wanted to read something short, something to wet my whistle yesterday and I stumbled upon EVERY HEART A DOORWAY. Little did i know that McGuire’s book won the 2017 Alex Award, the 2017 Locus Award, and the 2016 Nebula Award for Best Novella, is a finalist for the Hugo Award, the World Fantasy Award, and the British Fantasy Award, made the 2016 Tiptree Honor List, and that NPR called a “mini-masterpiece of portal fantasy — a jewel of a book that deserves to be shelved with Lewis Carroll’s and C. S. Lewis’ classics”

I don’t know that I would have read it had I know all of the above. It’s the rebble in me. Everyone loves something and so I turn from it. But I am so glad I didn’t. EVERY HEART A DOORWAY, or the Wayword Children series (as I’ve recently learned there are more then one), is pure magic.

Children have always disappeared under the right conditions; slipping through the shadows under a bed or at the back of a wardrobe, tumbling down rabbit holes and into old wells, and emerging somewhere… else.

But magical lands have little need for used-up miracle children.

Nancy tumbled once, but now she’s back. The things she’s experienced… they change a person. The children under Miss West’s care understand all too well. And each of them is seeking a way back to their own fantasy world.

But Nancy’s arrival marks a change at the Home. There’s a darkness just around each corner, and when tragedy strikes, it’s up to Nancy and her new-found schoolmates to get to the heart of the matter.

No matter the cost.

To explain EVERY HEART A DOORWAY in a succinct way is hard. Beyond hard. It’s as much a dark and creepy story as it is a magical one filled with rainbows. It’s Lewis Carrol’s Alice in Wonderland meets Marry Shelly Frankenstein only better than both with a gothic edge.

Eleanor West’s Home for Wayward Children is where parents send troubled kids, the one’s who have been through such trama they believe they’ve gone to another world. Only they really have been to another world. Eleanor West helps these children to both copes with the loss of their lives in other worlds and gives them hope that one day they might find a doorway back. She provides children with a safe place where they can be themselves but more than that, where people believe them.

There isn’t much about this story to criticize. I only want more. It’s both funny and witty, building a world in such a short amount of time I didn’t want to leave. There’s a diverse cast of characters including an asexual protagonist and a transgender boy. It is dark and beautiful and unlike anything, I’ve read before.

Nancy, our main character asks at one point why there are more girls than boys at Eleanor West’s Home for Wayward Children. The response she get’s is an insightful, yet subtle nod toward gender issues:

“Because ‘boys will be boys’ is a self-fulfilling prophecy,” said Lundy. “They’re too loud, on the whole, to be easily misplaced or overlooked; when they disappear from the home, parents send search parties to dredge them out of swamps and drag them away from frog ponds. It’s not innate. It’s learned. But it protects them from the doors, keeps them safe at home. Call it irony, if you like, but we spend so much time waiting for our boys to stray that they never have the opportunity. We notice the silence of men. We depend upon the silence of women.”

The other thing that really stood out for me, the characters aren’t morally ambiguous. Each character uses a different set of values or scales to determine what is good and what is bad. They each have a different definition of good and evil. It brought so much depth to a world in so few pages.

I just want to gush and gush but instead, I’m going to start reading DOWN AMONG THE STICKS AND BONES (Wayward Children #2)

2 thoughts on “Every Heart a Doorway”