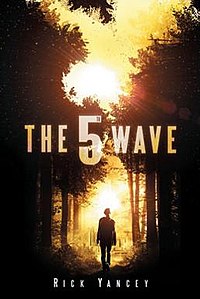 My oldest nephew, 14, will read anything I give him. He’s tackled Patrick Rothfus’s NAME OF THE WIND & the follow-up, A WISE MAN’S FEAR. We share a favorite book, READY PLAYER ONE by Ernest Cline. He’s read Dan Well’s I AM NOT A SERIAL KILLER. But for the first time, he recommended me a book, THE 5TH WAVE by Rick Yancey. And being a bit of a skeptic I put off reading it for far too long.

As most of you know, I’m a writer myself and so reading this book was a pleasant surprise for several reasons. First off, it was well written, there were a lot of things we didn’t know and sort of puzzled together as the book progressed. As a writer, I appreciated this because my latest book unfolds in a similar fashion. Even the ending of this wasn’t a disappointment, it makes me want to read the next book. I haven’t read any reviews on this yet, I’ll do that after I post this but the ending was my favorite. It finished what I felt like was Part one of a much bigger story. Something I’m trying to do in my own book. *Crosses fingers* I hope it works.

What I loved/hated about this book was: not always knowing who was telling the story. This was a pain when switching characters at first but then I started to enjoy the mystery of it. It allowed the story to unfold in a way that I wasn’t expecting. So after my initial reservations, I got on board.

Now, it’s the dawn of the 5th wave, and on a lonely stretch of highway, Cassie runs from Them. The beings who only look human, who roam the countryside killing anyone they see. Who have scattered Earth’s last survivors. To stay alone is to stay alive, Cassie believes, until she meets Evan Walker. Beguiling and mysterious, Evan Walker may be Cassie’s only hope for rescuing her brother-or even saving herself. But Cassie must choose: between trust and despair, between defiance and surrender, between life and death. To give up or to get up.

There are a lot of unanswered questions still. In fact so many I’m dying to get the next book and read it. It didn’t deter me from wanting to read the next by any means. I have some theories about where it’s going and what might happen. I want to know if it’s safe to watch the movie or will it ruin the next book for me? Anyone out there in internet land knows?