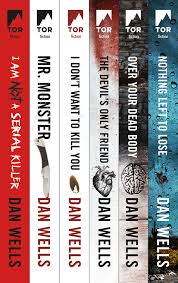 I know I haven’t posted in a while and there’s so much to say. I’ve been reading still, tons and tons. On the recommendation of someone wonderful, I read the John Cleaver series by Dan Wells. I’d read the first book a few years ago after I’d met Wells in person the first time. We have a friend in common, plus I have a secret fascination with serial killers (criminal justice background over here) and so I didn’t even question reading his first book. But like I said, it was a few years ago. Now on the hunt for comp titles and someone says to me,

Hey, did you ever consider Dan Wells’ books?

But after we talk about it, I agree to read the whole series. I set all other books aside and not out of a sense of obligation, out of the need to keep reading. The first one was better then I remembered. The second only became more complicated. By the fourth book, all shit has hit the fan, the government is involved and just when I think the books can’t get much better they do.

In the whole of the series book 5 is my favorite, OVER YOUR DEAD BODY. I’ve always wondered how hard it would be to write a character with multiple personalities. Like not just one or two, but like a thousand. My main character, for the book I’m currently shopping around, has lived many lives. While they are all essentially her, some have a stronger personality, some less. There are different likes, dislikes, experiences, loves, hates, etc. I only introduce a few of her former selves in the first book. I think I do it in a way which lets us see her as now and her in the past but they are two separate entities.

What I love love love love love about Wells’ book five is the growth err… umm changes Brook goes through. A demon named Nobody possesses her and brook lives to tell the tale. Unfortunately, she has all of Nobody’s memories. Nobody has possessed and murdered more than a hundred thousand young women. Getting to read how Wells masters the art of writing a character with a disassociative personality disorder kicked the whole series to another level for me. I never wondered who Brook was now. Unless it was a brand new character, which popped up from time to time, I knew the core of her main personalities like they were each their own character. It was truly artful.

There isn’t a doubt in my mind these books are the perfect comp title for many reasons, this being only one of the smallest. If you haven’t read this series, if your not squeamish, and you enjoy a sociopathic main character, give this book a try. It’s not what you expect. At all.