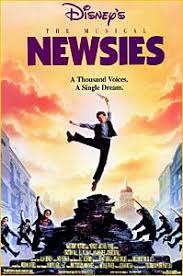 This post is scheduled to go live, Thursday morning. Thursday is the day I get to watch Newsies the Musical in theatre. I’ve been waiting years to see this play. I know it released on video a couple of years ago but I held out hope I’d get to see it live. Not that I’ve completely given up on that prospect, but I think the big screen is still better than nothing. I’m excited.

It all started when I was seven. The year was 1992 and Douggie Howser was a popular show, even for little old me. I don’t think I always understood what was going on, but boy my first crush was on Vinnie Delpino (as played by Max Casella). As I got older the girls at my school would talk about boys with blond hair and I was the odd gal out, more drawn to brown hair. I’m pretty sure this is where it all started. My dad, bless him, rented Newsies. I remember the first time I saw it. The boy who rides a horse. The dancing. Vinnie Delphino only now his name was Racetrack. There was so much going on and while I enjoyed it, I only watched it the one time. I probably went back to being obsessed with My Little Pony’s, Star Wars, Teenage Mutant Ninja Turtles and Captain Planet.

Fast forward to middle school. One of my friends invites me over for what she called a Newsie Party. “What is a Newsie?” I asked. Her jaw dropped as though I’d just asked what ice cream was. I would soon fall in love with Newsies all over again. From sometime around eighth or ninth grade through my high school graduation…. probably longer if I really think about it. My friends and I would get together and watch Newsies. Sometimes two or three or a record-breaking five times in one night. If I started to fall asleep, instead of drawing on me, they would rewind or fast forward to Santa Fe and I would bolt straight up. Jack Kelly to the rescue every time.

There were moments we would test our knowledge of the script. We’d turn the sound off and take turns as voice over actors. We knew the whole thing. Some of my friends wrote fan-fiction although, ironically I only ever read it. I think I’m the only one of the bunch actively trying to build a career writing. I was never gutsy enough to share my writing back then, and the idea of writing about something I cherished so much was intimidating. I did love the idea though. Recently I even googled Newsies fan-fiction and was pleased to see it’s alive and well today.

All of us had character names, and we’d frequently went by nothing else. Some were distinctly owned created by that person. Others were characters from the movie who we embodied. We’d dance and try to choreograph various songs. We even petitioned our theatre teacher to pick Newsies as the next musical. Although she was adamantly against it. Walking in the halls we’d pass one another and only had to say “Carryin’ the banner,” and the other would raise a fist to the sky in solidarity.

There are a lot of things I hated about high school. A lot. But Newsies was never one of them. Newsies made it bearable. Newsies brought a ragtag group of people together who might not otherwise fit. Newsies changed our lives each in their own little ways.

My best friend in high school was obsessed with Spot Conlon. So much so, that when another gal in our group said she knew a guy who looked just him, my bestie had to me him. They are still married today. It gives me hope I’ll find my Santa Fe one day. 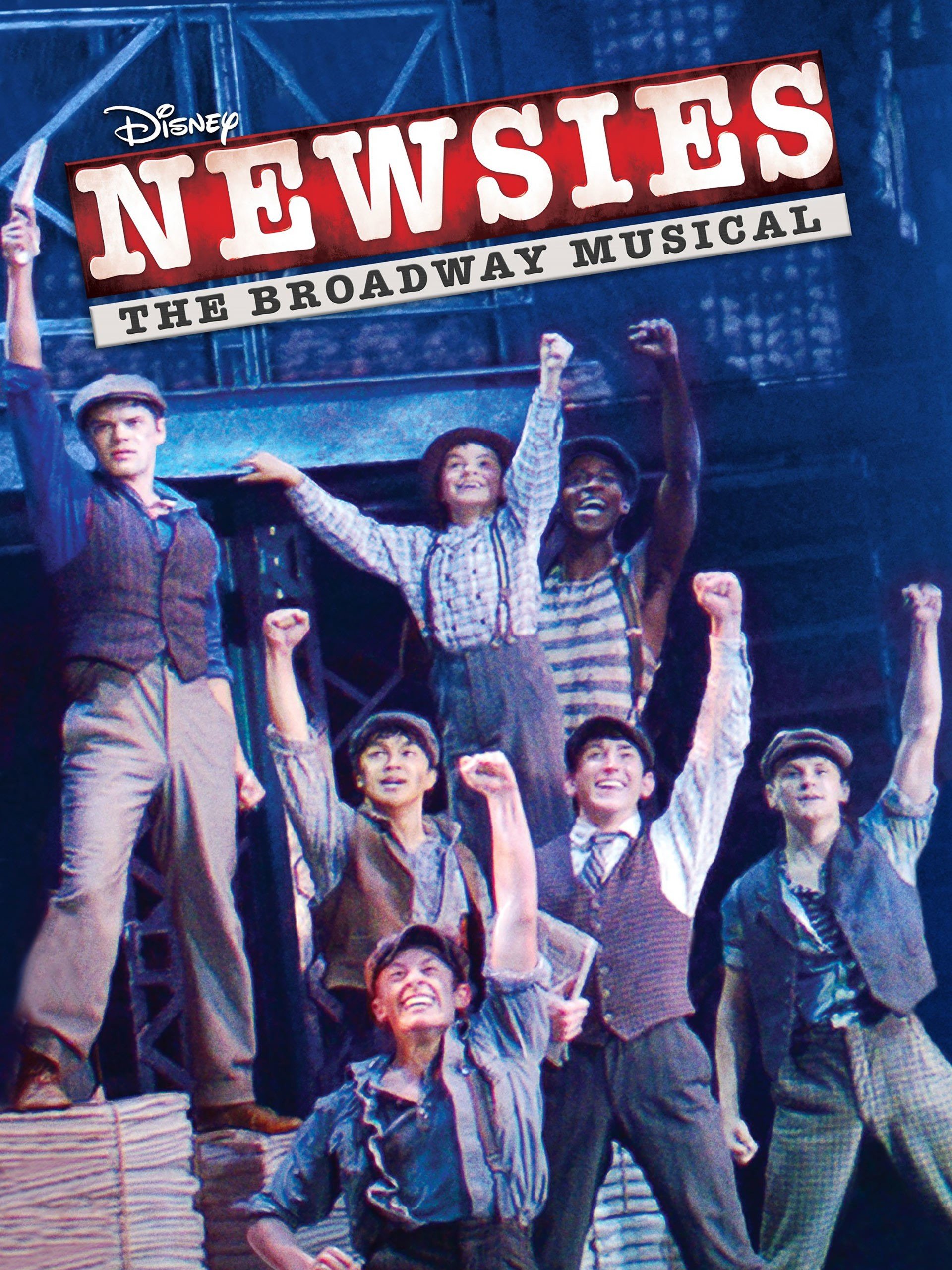 When the local video store went out of business it was a scramble between friends to get our parents to go down and buy the only VHS copy of Newsies in town. My dad won. He surprised me with it. I still own it today. It was a good thing, my copy was more than a little worn out. The movie wasn’t available in the store and this was before finding things online was so easy. I have a friend who still rolls her eyes every time this story comes up. She, for the record, has seen this play live several times so I figure she doesn’t have room to talk anymore.

I listened to the Newsies soundtrack for the first time in years today. I was flooded with so many memories and sharp feelings and the sickening taste of Mountain Dew. Oh gross, teenage me was a fool. I found, I still know every single line. I even remembered the lines cut from the soundtrack. It’s so ingrained in my mind, I don’t know if I could forget with effort. I ended up singing along to the entire soundtrack and only wrote about twenty words. Apparently, I’m incapable of writing while listening to it. I switched back to Frank Sinatra after and was able to put words to the screen and try to encompass the emotions of yesteryear.

A year ago, I was working at the middle school. I was teaching sixth and seventh-grade history. One of my kids started singing newsies in class. I chastised her for disrupting but was secretly thrilled by it. When the bell rang, I kept her after. She started to apologize for belting out lyrics to The World Will Know. I shook my head. The room cleared of other students and I told her to go on to her next class. Just before she got out the door, I said, “Hey Rhi, Carrin’ the banner.” She squealed, jumped up and down, and couldn’t find the words to express her happiness. I sent her on her way but she was back the next day with vigor. “Ms. Boyer, I had no idea you knew Newsies!” I gave her an eyebrow. “Rhi, we’re in class.” When the bell rang she started to sing Seize The Day and I couldn’t suppress it and sang along. I told her about my own Newsie parties and she told me about hers. Apparently, her friends got together regularly and did the same thing. A kindred soul. I was never able to fully regain my teacher authority with that one. I still run into her from time to time and she’ll start singing. I’m thankful for many reasons. She also introduced me to Hamelton and now I’m obsessed.

A few weeks back, I met someone my own age who said he also had Newsie parties as a teenager. I’m still utterly blown away by this. Not that someone else would love this movie as much as I did growing up but that someone else understood that feeling which is hard to capture. Someone who wasn’t twelve years old and my student. I find the little things in life truly amazing. I just never imagined a movie would pull so many people into it. To say I’m excited to see this today feels like an understatement. There’s this part of me that only wishes, I could have all these people in the same room. That we could all watch it together. I guess that’s what memories are for. Until that day anyway.

3 thoughts on “Carryin’ The Banner”