For as far back as I can remember, I’ve loved stories. When I was little, my dad and I would imagine a world of fairy tails. Together we would create adventures that would go on for months. There were gargoyles and princesses. Keys that took you away to magical lands long forgotten. Where ravens brought you messages of the future and love from distant lands. Cursed ice castles and abandoned farms and every place between. I guess

in a lot of ways our collaboration didn’t start five years ago, it started more than thirty.

The first book I ever wrote was in the fourth grade and it was about Cinderella and her stepsisters. Only Cinderella was evil forcing her wickedness upon the innocent. I’ve always been a sucker for a fairy tale rewrite of ANY KIND and often the darker the better. I still love a happy ending though. I can’t help it, there is something about fairy tales that I’m forever drawn to.

When I reached high school I stopped reading. I don’t know why. It was probably a slow progression, where human friendships took the place of my inked ones. I remember sitting on my bed sulking one day. I was sixteen probably going on seventeen. I remember wishing I had a book that I could fall into. It had been so long. I wanted something that would change my life. To feel something that would conjure more then I’d felt before. I laid back against the wall and said to no one in particular, “Is that so much to ask for?” A hard copy of Harry Potter fell off my bookshelf and clipped me in the head. It bruised. But it makes for a good metaphor.

My sister had loaned me her copies months and months before, although I never read them. I rubbed my head and figured I should take the sign. I read through the first four books in short succession. It started a whirlwind in my life. I was gobbling books down. In the summer, I’d read one a day. That never really stopped. I might not read one a day as frequently anymore but I still read 60 or 70 books a year. I went to the midnight release parties for books five, six and seven. I took my younger sisters as a beard to the first pretending I was too cool for Harry Potter. But I would come home and stay up all night until I’d finished the book. I’ve read Prisoner of Azkaban no less than fifteen times. It has always been my favorite.

The thing about Harry Potter wasn’t that it got me into reading again, although it did. It did a lot more than that for me. Somehow Harry Potter made it okay to own my nerdiness. I found like-minded people and it was like being apart of a secret club. I love the story, and the memories I have attached. But also Harry Potter made me realize that I really did want to be a writer. I’d always wanted to do that but it was never “practical” enough. It might still be far-fetched but I don’t care anymore. I write because it’s what I love. I love telling stories. Capturing emotion on the page. There is nothing better than bringing someone to tears be it happy or sad through story. The ability to engross the reader until they care about something I created the way I care about so many words others have created. It will never be lost on me.

I attribute J.K. Rowling with changing my life. There are people in my life today of whom we bonded strictly over Harry Potter. We grew past that but it started with her book. One of my best friends was this way. And too many other people to count. The Deathly Hallows sticker on the back of my car has started more conversations with strangers than I ever anticipated. My tattoo does the same. I had a woman come to my table the other day at a restaurant because her nine-year-old daughter is obsessed with Harry Potter and she just wanted to double check for her daughter that I did, in fact, have a Deathly Hallows tattoo on my arm. I do and we chatted for a bit. Her daughter was over the moon that someone else loved Harry Potter as much as she did. Apparently, none of her friends or parents have read it. My laptop is covered in stickers and one of them is the Deathly Hallows. There is always a student or two or ten who get excited by it as well. I instantly go from “Ugh a sub,” to “Oh!!!! She’s the Harry Potter sub!” I’m cool in their eyes and it helps me teach. It’s easier to get through to a teenager when you can bond over something mutual. 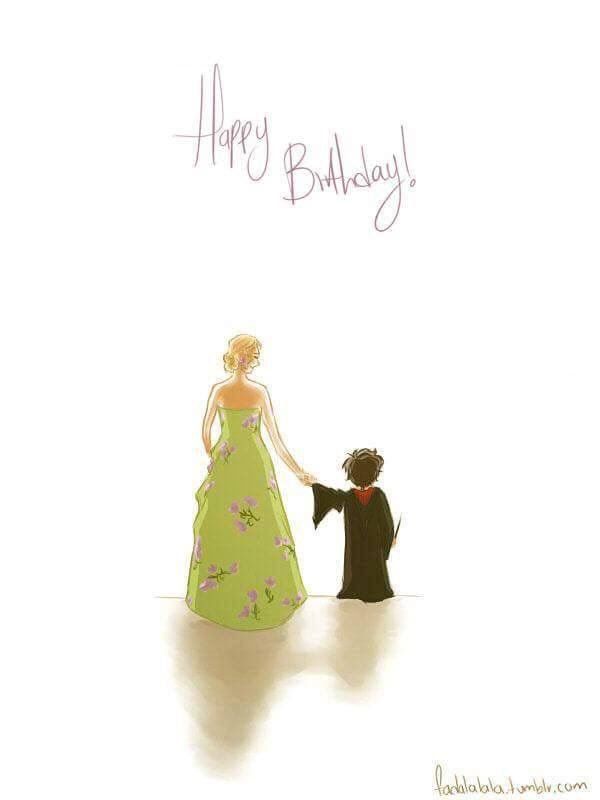 Last summer was the first time I went to Harry Potter World. I openly wept while sitting in the Three Boomsticks. I managed to hold it in for a while but damn. This thing I’d only ever imagined was tangible. And every single other person there was just as excited as I was. That’s magic wrapped in a blanket of love.

So today, on the birthday of both Harry Potter and it’s creator, J.K. Rowling, I wanted to share some of my Harry Potter stories. How a little wizard impacted my life in so many ways.