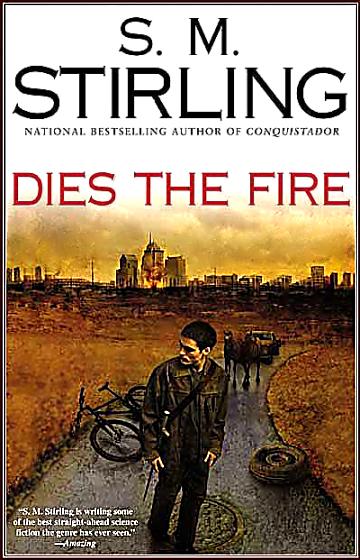 The Change is believed to be an electrical storm which produced a widespread blinding white flash. This rendered all electronic devices and anything remotely mechanical inoperable. Planes fall from the sky, cars stop working, guns won’t fire, explosives don’t detonate, electricity has vanished, water pumps no longer function, and fires run wild. As a direct result, the whole world is flung back into the Dark Ages in what is seen as the largest global catastrophe ever. Humanity must survive off whatever can be worked by hand: bows, arrows, swords, knives, horses, bikes, etc.

I have a lot of thoughts on S.M. Stirling’s first installment of the Emberverse series. It has what I’d describe as a slow start, despite the initial pow of The Change. We primarily view the world from two swapping points of view: The McKenzies, a Wiccan based clan, and The Larssons, also known as The Bear Hunters, a sort of traveling band do-gooders. Each group grows substantially as the book progresses. While the McKenzies start with farming land, they eventually build a working relationship with The Bear Hunters and both groups aim at keeping the peace in their lands.

DIES THE FIRE tackles the end of the world quite like I’d expect any well-written novel too. Civilization collapses and a few lucky ones survived. Most city-dwellers run out of rations quickly and most of the populace dies off for one reason or another. Only the ruthless and most organized and or ambitious of folk survive.

I can’t help but chuckle at the villain, who by all accounts is a former history professor and SCA memeber. He calls himself The Protector and uses his knowledge of medieval history to recreate his own personal world with him as the fellow in charge.

On a whole, I enjoyed the survival aspects of this story. While The Change is never officially explained, I didn’t feel like it had to be. I was fine only knowing what the MC’s knew. Like I said earlier, this first book was a little on the slow side for my personal tastes. However, I’d expect the next to pick up the pace. I felt like this book was setting the scene for more to come later. I could be wrong but I’d read the next one to find out for sure. I did find time a little hard to follow. Rarely being sure of how much time had passed in any given set of chapters.

A word of warning. I did audio, despite being given a heads up beforehand. The narrator pronounces a handful of words WRONG. Like in an annoying kind of way. I found myself correcting him, every single time.  It wouldn’t prevent me from doing audio again, but it was slightly obnoxious.

All in all, I’ll be reading the next installment in the coming months.